Coronavirus Update:  Shelter in place advisories for Contra Costa effective now until May 31, 2020.  For the latest information on what the City is doing to keep us all healthy and safe, click here or visit www.ci.hercules.ca.us/coronavirus.

Commander Thomas Koeppe graduated from Diablo Valley College with an Associate of Arts degree in Criminal Justice, in 1991. In 1992 he attended the Napa Valley College Police Academy and upon completion applied for the position of Reserve Police Officer, with the City of Hercules. He was hired as a Reserve Police Officer for the City of Hercules in 1993 until being offered a full time Police Officer position in 1994. During his time as a Police Officer he attended numerous training courses and had the opportunity for collateral duties as a member of Hercules Police Department. A few of the highlighted courses and assignments are: Traffic Accident Investigation, SWAT training, Incident Management, Field Training Officer, Mutual Aid Mobile Field Force member, Taser Instructor, Firearms Instructor, Special Response Team Sniper, Special Response Team Leader and Recruit Training Officer for the Contra Costa Regional Training Center Police Academy. Thomas was promoted to the rank of Sergeant in 2008. In 2010 he earned a Bachelor of Science degree in Criminal Justice Management. Thomas was promoted to the rank of Commander in 2012. Commander Koeppe currently oversees the Operations Division of the Police Department. 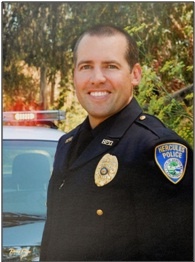