We have an opportunity in Hercules to preserve the 12 acre Chelsea wetlands near Chelsea by the Bay and Hercules by the Bay communities. The wetland is a vital part of our ecosystem. Egrets once nested there and it remains the habitat of some endangered species.

The past century took its toll on the Chelsea Wetland. As the area was developed, tons of soil was dumped in the wetland. A similar practice occurred throughout the country. By 1950, an estimated 45 million acres, or 35%, of all wetlands in America had been drained.

Restoring the Chelsea wetland has several benefits. By removing the unnatural soil in Chelsea Wetland, the water storage capacity will increase by four feet, thus helping to reduce flooding in nearby neighborhoods, as happened in Pinole in 2006. This is particularly important to the communities of Chelsea by the Bay and Hercules by the Bay.

A healthy wetland also prevents pollutants from running into the bay. Ecologists call wetlands “the kidney” of the ecosystem because of the natural cleansing functions they perform. They do this by retaining sediments and toxic pollutants attached to the sediments. Wetland plants also reduce algae blooms and fish kills.

The proposed project will consist of restoring tidal marsh habitat, improving flood storage on lower Pinole Creek, and providing recreational opportunities along the existing Bay Trail. The tidal marsh restoration would be accomplished in phases through the excavation of approximately 40,000 cubic yards of fill previously deposited on the site and the installation of an improved box culvert and bridge structure, and removal of the existing 36” wide outflow flap gate culvert that connects to Pinole Creek. Approximately 140 linear feet of an existing 8” on-site sewer line would either be re-located into the east Pinole Creek channel bank or be lowered approximately 10 feet in order to accommodate the placement of the new tidal channel. The project also includes the temporary installation of sheet piling along the northern portion of Pinole Creek to isolate tidal waters from project work and the eventual removal of the sheet piling to allow tidal connection from Pinole Creek to the constructed tidal marsh complex. An 18” drain culvert will also be abandoned in place with a concrete plug end as necessary adjacent to the Bay Trail. A portion of an adjacent 2-acre marsh-upland transitional area owned by the Chelsea-by-the-Bay Homeowners Association (HOA) is incorporated into the design based on a Memorandum of Understanding agreement. It is anticipated that the environmental review of the project and outside agency permit issuances should be completed before Spring of 2017. It is hoped that construction can commence between April and October 2017. Look for project related documents and future meetings in the notices section on the leftside of this Project page. 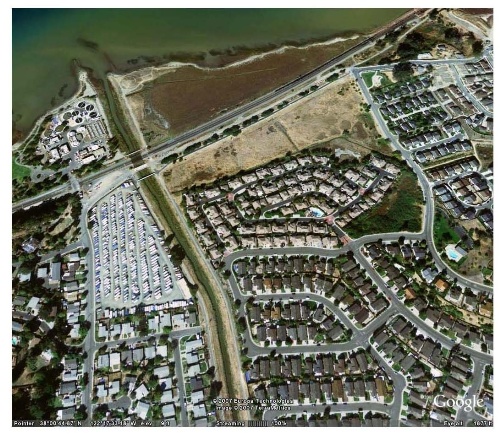 Currently, the Chelsea Wetland turns dry and brown in the summer. A healthy wetland and creek would cycle water year round, providing a place for wildlife. Native vegetation would return naturally or be reintroduced. Some of the current goals of the restoration project include:

The City of Hercules has committed to reviewing the county’s work on flood control to make sure that we are protected and that future efforts will not aggravate what is currently in place. 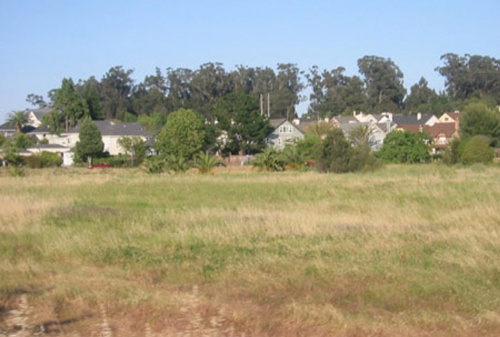 Last year, the City of Hercules finalized grant agreements with the California Natural Resources Agency and the Environmental Protection Agency and Association of Bay Area Governments. In all, the Chelsea Wetlands Project has recieved several grants: $1.83 million from the Proposition 84 is the California River Parkways Program; $145,000 from the Green Infill Clean storm Water Initiative (EPA/ABAG), $56,200 from the Contra Costa County Fish and Wildlife Propagation Fund and $40,000 from the San Francisco Foundation. The City of Hercules has also contributed $128,000, bringing the project total to over $2.1 million.

The list of all grant recipients can be found on the Natural Resources Agency Website at: http://www.resources.ca.gov/.

The City of Hercules and their consultants have presented plans and answered question on the Chelsea Wetlands Restoration at community workshops sponsored by The Friends of Pinole Creek Watershed. And the Chelsea by the Bay Homeowners Association has been actively involved with the City on this Project. Community involvement is a critical component of success for projects like this.

If you are interested in getting more involved in the wetland restoration, contact Holly Smyth for the Chelsea Wetland Restoration Project at (510) 245-6531.