On April 1, 2019 Madison MRH-1 Franklin Canyon LLP (“Applicant”) filed a zoning clearance application request with the City seeking a determination on whether the redevelopment of the existing 18-hole Franklin Canyon Golf Course into a 9-hole golf course and recreational vehicle resort is consistent with Measure M.  Measure M serves as the General Plan and zoning designation for the Franklin Canyon area.  The Applicant seeks to create a destination RV resort featuring 160 spaces for RV parking, campsites, a newly constructed club house with a restaurant and meeting rooms, and a remodeled 9-hole golf course and related amenities.

On June 26, 2019, a Notice of Decision was made and posted regarding the proposed uses on the Franklin Canyon Golf Course. 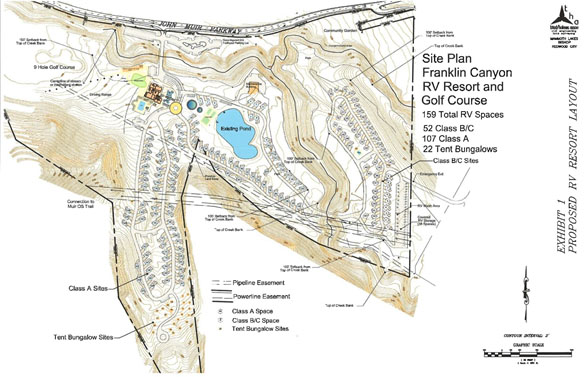 In 2004, City of Hercules voters passed Measure M and applies to the entire “Franklin Canyon Area”, which includes:

A 483-acre portion of the Franklin Canyon Area contains two parcels of public open space/agricultural land which forms the northeastern most parcel of land within the City of Hercules. Owned and maintained by the Muir Heritage Land Trust (MHLT), this portion of Franklin Canyon is accessible from the 702-acre ‘Fernandez Ranch’ due east of Franklin Canyon, MHLT’s adjacent, publicly accessible open space. These two permanent open space areas provide multi-use trails open for public use and enjoyment. The properties also permit grazing that improves rangeland health and overall site habitat quality.

In 2004, City of Hercules voters passed Measure M, which stopped proposed development (including resort and housing development) and preserved the land for primarily agricultural, recreational, and open space purposes. In June of 2010, MHLT purchased Franklin Canyon as part of its mission to preserve Contra Costa County open space.

Also in 2010, MHLT successfully completed the Fernandez Ranch Public Access and Creek Restoration Project, which opened the Fernandez Ranch site to the public. MHLT’s work at the 702-acre Fernandez Ranch site included a major restoration of a reach of Rodeo Creek and adjacent tributaries, and a public access staging area. Within the ranch, 3.5-miles of new multi-use trails were created, supported by the new trailhead, seating and picnic facilities, interpretive exhibit, and a historical corral and homestead foundation. Fernandez Ranch is actively grazed by cattle by an independent grazing lessee under contract with the MHLT. Livestock grazing is a primary land management tool used by MHLT on its open space lands, a key goal being to promote biodiversity and to reduce wildfire fuel loads. Grazing also supports MHLT’s interest in site interpretation by maintaining the ranching heritage of the region’s open space lands. The Fernandez Ranch site provides the foundation and a critical link for Franklin Canyon’s development into public open space.

Subsequent phases may be proposed in the future. These subsequent phases could include grazing facilities improvements, additional trails, and/or other open space recreation elements such as picnic shelters and overlooks. However, no planning has been conducted to conceptualize these additional facilities/phases, nor is funding available to construct any future facilities.

As required under the California Environmental Quality Act, the City in  2013, released an Initial Study of the Franklin Canyon/Fernandez Ranch project and announced its intention to adopt a Mitigated Negative Declaration (MND).