Coronavirus Update:  Shelter in place advisories for Contra Costa effective now until April 7, 2020.  For the latest information on what the City is doing to keep us all healthy and safe, click here or visit www.ci.hercules.ca.us/coronavirus. 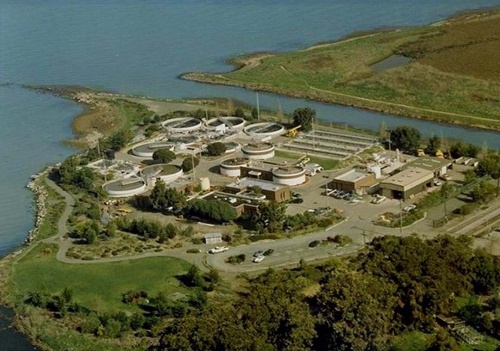 The Pinole-Hercules Wastewater Treatment Plant (WWTP) is located at the foot of Tennant Avenue and was originally built in 1956 to provide primary treatment for the City of Pinole. In 1971 the cities of Pinole and Hercules entered into a joint use agreement to provide treatment for both agencies. Since that time the plant has had two major expansions, first in 1972 and then in 1985, to provide secondary treatment for up to 4.06 mgd (million gallons per day) dry weather flow and 10.3 mgd wet weather flow, which is the current plant capacity.

Every year, the Treatment Plant, which is more than 50 years old, requires a high level of ongoing maintenance, in addition to needing several major capital improvements. The need for these improvements is driven in part by normal wear and tear, but also by the necessity to modernize the plant to comply with stricter environmental requirements imposed by the state and federal regulating agencies.

For the past several years, the City of Hercules has worked with Pinole to find ways to improve the treatment of the wastewater from both cities. While the plant did receive a permit to continue operations, the Regional Water Quality Board mandated the City of Pinole to provide a modernization plan for the plant.

The effluent discharged from the WWTP is regulated by the San Francisco Regional Water Quality Control Board (RWQCB) and the WWTP operates continuously under National Pollutant Discharge Elimination System Permit No. CA 0037796 issued by that agency. As a requirement of the discharge permit, a myriad of tests are performed daily on the effluent by the WWTP’s certified lab and certified analysts including pH, chlorine, coliform, total suspended solids, and biological oxygen demand. Reports are submitted to the RWQCB monthly and annually. It should also be noted that the WWTP operators are all certified by the State Water Resources Control Board.

The permit currently specifies flows below 10.3 mgd receive secondary treatment and be dischargedinto the San Pablo Bay from the Rodeo deep water outfall. The permit allows primary treated flowsin excess of 10.3 mgd to be blended with secondary treated effluent, chlorinated, dechlorinated, and then discharged from the deep water outfall in Rodeo. Flows in excess of 10.5 mgd may be diverted to the emergency outfall located at the WWTP, which is shallower. The higher flows occur during heavy rainfall events and are due to infiltration into the sewer collection pipelines that convey the effluent to the WWTP. At no time does the plant discharge any untreated sewage into San Pablo Bay.

In 2007 the RWQCB issued a mandate, which was subsequently modified in 2012, requiring improvements be made to the WWTP to provide secondary treatment up to 20 mgd; also that up to 14.6 mgd of treated effluent be discharged to the Rodeo deep water outfall and the WWTP shallow water outfall be limited to flows in excess of 14.6 mgd. The permit specifies that these improvements be operational by June 1, 2017.

Since 2007 the Cities of Hercules and Pinole have been working to environmentally clear, design, and finance the WWTP expansion. As of this update, the project has an adopted Environmental Impact Report, both agencies have submitted individual applications for $24M in State Revolving Fund loans from the State Water Quality Control Board (WQCB) to fully fund the $48M construction cost, and the 90% final plans and specifications are on track to be completed by the end of May 2015.

Additionally, the 2 permits required for construction have nearly been secured from the Contra Costa County Flood Control District and Bay Conservation and Development Commission. The Cities recently executed a Fiscal Agreement to manage the project funding and construction, and completed a prequalification process for potential bidders.

It is anticipated the WTP upgrade project could be out to bid July 2015. The City of Hercules has a Sewer Enterprise Fund that is supported by rates paid by the citizens of Hercules. Since the City of Hercules maintains joint ownership of the Pinole/Hercules Wastewater Treatment plant facilities, the City of Hercules will be paying for half of the WWTP expansion. The total cost for the expansion is estimated to be $48M, which includes design, construction management, and a 10% contingency.

The $24M State Revolving Fund loan to fully fund the Project is a 20 year loan at a rate of 1.5%. Repayment of the loan will be from the Sewer Enterprise Fund. The Sewer Enterprise Fund has $10M in working capital as of February 2015, which is adequate to cover the City’s debt service and handle any additional unanticipated expenses associated with the plant expansion not covered by the State loan.

In addition, the WasteWater fund has $6.1 million in bond proceeds from an earlier bond issue available to meet other capital needs of the waste water system. The capital and operating costs for the waste water plant do not impact the City’s General Fund.