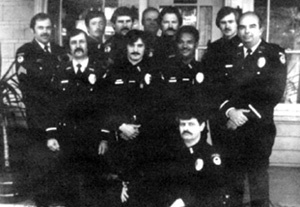 During the first seventy five years of its existence, the City of Hercules used various resources to enforce the laws and keep the peace. County constables were the first law enforcers to patrol Hercules, along with plant security guards. Then in 1965, the Hercules Powder Company hired the city's first Police Officer. He was a one man police department and patrolled the company owned town of 300. A few years later, Hercules contracted with the Pinole Police Department to provide police services.

As the population and demand for service increased, the City Council desired to establish its own police department. In July 1977, the first officer was hired to form the police department. Seven more officers were hired and trained within the next year. On July 1, 1978 the Hercules Police Department opened its doors and began modern law enforcement in Hercules. The department was comprised of the police chief, one sergeant, one corporal, five officers and one cadet. The first police facility was located in a three-bedroom house at 575 Railroad Avenue, across the street from the main office of the Hercules Powder Company.

The mission and philosophy of the police department at inception was involvement and interaction with the community. Officers engaged in frequent contact with citizens, conducted foot patrols of the parks and neighborhood watch meetings. Utilizing a generalist concept, officers handled all aspects of investigations from start to finish including liaison with the District Attorney’s Office and the court. Officer deployment was one officer per shift with some overlapping coverage during the evening hours and weekends.

During the first five years, the police department recruited aggressively for police reserve officers. They were used to supplement the patrol force, primarily as cover officers. A police cadet was also employed to handle evidence, records, vehicle maintenance and general duties. One secretary handled all of the office duties until a records clerk was employed in the early 1980’s. The police department has always been involved in special programs and has valued creativity. The department obtained a traffic grant from the State of California, for a full time traffic officer. Dangerous Stranger and drug prevention programs were provided to the elementary schools and a youth police academy was developed to promote interaction with teens.

Department leadership places a high emphasis on employee development and maintains compliance with California Peace Officer Standards and Training (POST) requirements. Over the years, many programs have been implemented including the formation of a Special Response team, a K-9 unit, a Traffic Motorcycle, a Dual Purpose Motorcycle, bicycle units, a Mobile Field Force and a D.U.I. enforcement unit. These programs help keep the Police Department on the cutting edge and the department continues to seek new and innovative ways to sustain a standard of excellence.