The City of Hercules has a unique history which has transformed the city from a small company town to a bustling and thriving community. In the late 1800’s the Industrial Revolution changed the face of business throughout the country. The California Powder Works company was a part of this revolution and played a key role in the formation of the city now known as Hercules.

California Powder Works plants made black powder; an explosive substance used mostly in guns. Their first plant opened near Santa Cruz, California in 1861 and they opened a second plant near Golden Gate Park in 1869. With the growing population of San Francisco and the explosive nature of their product, the company was forced to find a more rural location.

Company Town is Formed
In 1879, that location was found and the history of Hercules begins. The Hercules plant opened in 1881 and began producing dynamite. In 1913, the workers from the Santa Cruz plant were relocated and the plant added black powder to its production schedule.

Company managers incorporated the town on December 15, 1900 due to increased difficulty getting laws passed by the County Board of Supervisors to support the plant. The first City Council consisted of plant managers and ordinances were passed primarily to ensure the success of their products.

California Powder Works sold their dynamite under the name of Hercules Powder. Hercules, the Greek mythological hero, was chosen as the name of the product to showcase how potent the dynamite was. When the town became incorporated, the name Hercules became a natural choice for the community leaders, who were also the plant managers. 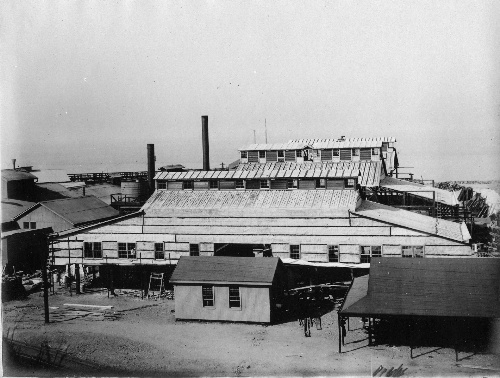 The California Powder Works was acquired by the Du Pont Corporation in the 1880s but was forced to sell off some of their companies due to the Sherman Anti Trust Act. In 1912, as a part of the break up, the Hercules Powder Company was incorporated. Despite the name Hercules Powder Company, the company had over thirty locations including one in Canada and England.

In the first 38 years of the California Power Works’ operations in Hercules, 59 lives were taken by explosions. The nitroglycerine house and the building in which the dynamite was produced were the primary locations of the blasts. In February, 1908, 24 men were killed in a single explosion. This was the largest explosion in the plants history. 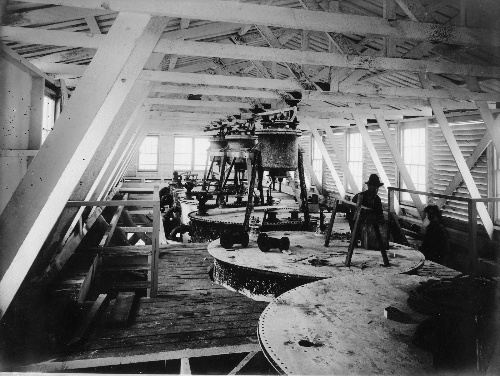 Dangers of producing explosives, growing Bay Area populations, and changing market trends forced plant managers to look ahead. In the 1940’s the company decided to build an anhydrous ammonia (NH3 fertilizer) plant. When dynamite manufacturing was discontinued in 1964, transitioning completely from explosives to fertilizer was a natural step. Hercules Powder was then renamed to Hercules, Incorporated.

The land surrounding the plant had served as a buffer zone when Hercules Power Company was manufacturing dynamite, but was no longer needed when only fertilizer was being produced. After a close examination of the immensity of developing the land, Hercules, Inc. decided their lack of experience in the development field would make the project undesirable. They decided to sell the land and in 1974, Centex Homes of California, Inc. purchased the first section, a large residential area near modern day Lupine Road.

The strike and economic conditions led to permanent closer of the plant. Local production costs made it cheaper to purchase and ship fertilizer to Hercules than to manufacture the product locally. Rising costs of natural gas and a sever drought also added validity to the plant closer.

The City’s revenues and expenditures fluctuated as the revenue and expenditures of Pacific Refinery changed. In 1978, when the refinery was doing very well, the city reduced property tax rates substantially. In 1993, with the economy in a recession and the plant reducing operations, City Council reduced expenditures by 10 percent across the board and completely eliminated several special programs.

Since the refinery provided much needed sales tax revenue for the City, the effects of Proposition 13 passed by the State of California, were not fully felt in Hercules until the refinery plant closed. Prop 13 put a cap on the amount of property tax that could be collected per parcel and regulated property tax for all property owners in California. Even though, all Californians now pay one percent in ad valorem property tax (this excludes bonds and special districts), the amount each city gets is based on the tax rates from when the law was passed in 1978.

Since property taxes were very low when Prop 13 passed, the City continues to get a small percent of the property tax paid even though economic conditions in the community have changed. Despite the lack of revenue generated by property taxes, the City has worked diligently to maintain high levels of service for its residents.

Before Pacific Refinery or Hercules, Inc, closed their doors, economic conditions were good and the city passed its first General Plan in 1972. The plan has since been updated, but much of the development that exists today was outlined from this original plan. The plan divided the city into ‘villages’ and each village was a subdivision of homes. The primary focus at the time was creating a bedroom community and its legacy is still apparent today. 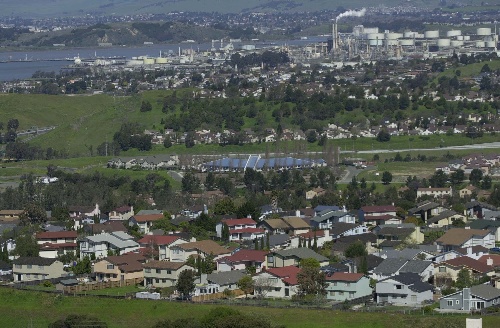 The 1980’s continued to see vast amounts of growth. Sycamore Place and Creekside shopping center both opened, new parks including Refugio Valley and Foxboro are created and City officials work on the drawings for a new Civic Center and Community Swim Center. Both centers open in the early 1990s. Hercules was growing so quickly, it was the fastest growing suburb in California in the 1980s.

Throughout the 1990’s Hercules continued to grow into the community it is today, but near the turn of the 21st Century, there were still some missing pieces. Neighborhoods felt disconnected and shopping centers were scattered. The increasing need for city services coupled with increasing budget constraints compelled city officials to address long term sustainability. Despite the 1998 revision of the General Plan, City Council knew more would need to be done to keep the community alive and preserve its history of quality.

To do this, city officials involved the community, including both private and public stakeholders, in the 2000 Charrette process. Over 300 participants outlined what they wanted to see for their community. A coherent vision, walkability, interconnectedness and meaningful neighborhood centers were key elements the community wanted and all were incorporated to create the Central Hercules Plan.

The Central Hercules Plan lays out how four under-developed neighborhoods will be transformed into thriving, distinct neighborhoods. The four neighborhoods are Hilltown, the Waterfront, the Central Corridor and the Hospitality District.

In 2003, several new home subdivisions begin opening including Victoria by the Bay and Promenade. The Bayside and Baywood neighborhoods open a few years later. Live/work buildings are a part of both the Promenade and Bayside neighborhoods and are one of the first steps towards the transit oriented community residents outlined in the Central Hercules plan.

Regional Center
Today, with almost 25,000 residents, Hercules continues to grow into a transit oriented community and to become a model for other Bay Area towns. Using smart growth principles and ensuring development conforms to the Central Hercules Plan, Hercules remains true to its unique history and quality that residents have come to appreciate and love.